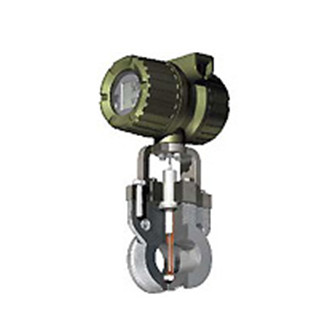 The digitalYEWFLO vortex flowmeter combines the field proven sensor and body assembly used in more than 260,000 units installed worldwide with a unique and powerful combination of digital technology that includes spectral signal processing (SSP), a Yokogawa innovation. The digitalYEWFLO vortex flowmeter is accurate and stable, even in harsh process conditions, and has a highly reliable and robust design that delivers improvements in plant efficiency and reduced operating costs.

A steam table provides data on the temperature, pressure and density of steam and is provided by a certification body such as the ASME. The saturated steam curve shows the steam saturation point for each pressure/temperature level. The digitalYEWFLO converter calculates the mass flowrate using the density figure from the steam table. With its Spectral Signal Processing system, the digitalYEWFLO is able to accurately measure fluctuations in temperature. - With superheated steam, density is calculated as a fixed pressure value that includes the superheated temperature value.