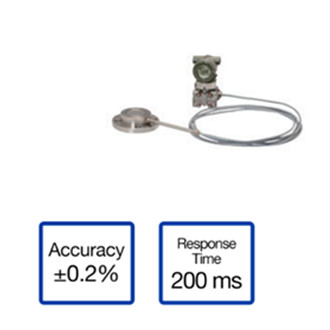 Diaphragm seal is used to prevent process medium form entering directly into the pressure-sensing assembly of the pressure transmitter, it is connected to the transmitter using capillary filled with fill fluid. EJA438E Diaphragm Sealed Gauge Pressure Transmitters can be used to measure liquid, gas, or steam pressure. EJA438E outputs a 4 to 20 mA DC signal corresponding to the measured pressure. It also features quick response, remote setup and monitoring via BRAIN or HART communications and self-diagnostics. FOUNDATION Fieldbus, PROFIBUS PA and 1 to 5 V DC with HART (Low Power) protocol types are also available. All EJA-E series models in their standard configuration, with the exception of the Fieldbus, PROFIBUS and Low Power types, are certified as complying with SIL 2 for safety requirement.

The EJA-E series of transmitters is Yokogawa's most recent evolution of the DPharp family. Released in 2012, it combines the ruggedness and success of the work-horse EJA-A series with the performance of the thoroughbred EJX-A series to deliver the type of product you have come to expect from Yokogawa.

The EJA438E is a gauge pressure transmitter with a remote diaphragm seal in the series. 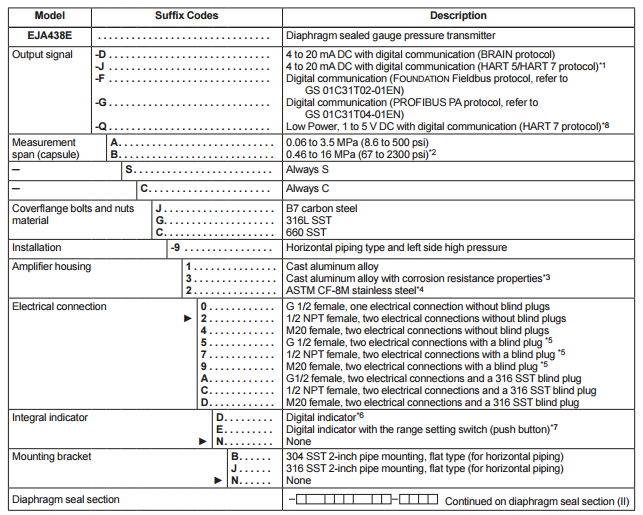